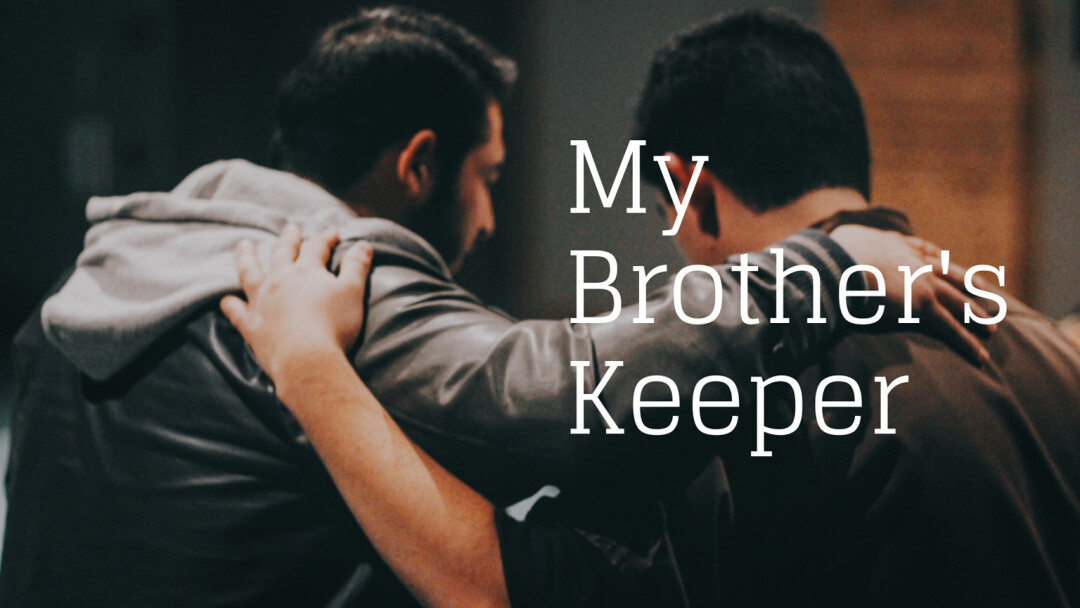 When I think about my role as a Christ-follower in regards to those around me, I sometimes remember the story of Cain and Abel. If you remember the story from Genesis, you know this is the first incident of sibling rivalry to be recorded in the Bible. Like most children, the boys probably didn’t heed their parents’ lesson of sinful desires and their expulsion from the Garden of Eden. Cain grows jealous of his brother Abel and eventually kills him. When God confronts him in Genesis 4:9, Cain’s cold and rebellious response is “Am I my brother’s keeper?” Even though Cain’s response was an attempt to hide and avoid being blamed, he does pose a valid question: Am I supposed to be responsible for my brother? God punishes Cain for his grievous act then uses the rest of Genesis to answer Cain’s question.

Throughout the rest of Genesis, we see stories of God’s promise and graciousness as well as the faith of Noah, Abraham, Isaac, and Jacob. But it is near the end of Genesis, through the story of Joseph, that God answers Cain’s question with an emphatic YES. Even though Joseph was sold into slavery by his brothers, he rises through his hardship, rises out of prison, rises above his difficult circumstance, and becomes second in command of all of Egypt. Then when famine strikes the land, Joseph’s brothers come to Egypt for grain. As the story continues, Joseph eventually reveals to his brothers who he is and reminds them of their sinful act. He calls them out and wounds them with the truth. But what could have been a story of perfect revenge becomes a story of forgiveness and love. Through Joseph and his compassion for his family, all of his brothers and their families are saved from the famine. God’s answer at the end of Genesis is yes. You are supposed to be responsible for your brother.

When we read Proverbs 27:6, “Faithful are the wounds of a friend, profuse are the kisses of an enemy,” we are meant to remember that there are two parts of friendship. As a friend, we can speak truth into the life of someone who is sinful and needs repentance. Similarly, we should allow our friends to call us out when we are in a similar struggle. It is a matter of keeping each other accountable. Truth is bidirectional; we speak it out, and it speaks to us as well. This is why Paul encourages us in Hebrew 10:24 to “spur one another on toward love and good deeds.” The word “spur” means to stir up, to prod, or urge on. With horses, we know that spurs are used to get them to move forward. Paul is telling us to poke or urge on each other forward toward love and good deeds. Why? Because we are responsible for each other as brothers and sisters in Christ. Of course, this poking should always be done in love, especially when drawing attention to someone’s sin or encouraging them toward action (this also applies when the direction of the poking is toward us). When this happens, sometimes it can cause hurt feelings. With Proverbs also in mind, “Faithful are the wounds of a friend,” we should not get discouraged when this occurs, knowing that those wounds have come from a friend.

Keep in mind that “friend” is not defined loosely. It’s not that person that clicked LIKE on your Facebook post or that neighbor who waved at you from down the street. It’s not just anybody you know. In the context of the verse, the word “friend” is used in a more intimate way, a very close friend, one you confide in, one that accompanies you in your life’s journey, one that feels responsible and vested in your wellbeing. These are the people who know who you really are. This “friend” could be part of your family like a father or mother, sister or brother, a spouse, or part of your spiritual family, one who's close to you. Proverbs suggest that we should consider their advice, even if it wounds us, with greater value than any adoration from any casual friend or compliment from those we call enemies.

“Cancel Culture” can invade and influence our behavior as Christians, making us shut out people who disagree with us. Yet, we should refrain from such juvenile behavior when our close friends or family addresses our sinful behavior. Words can be painful, and it is in our nature to immediately resist or resent them. Yet, we should consider if there is truth in what they are saying and if there is, we should understand that they were “spurring” us toward repentance or encouraging us into action. Deep down, we know that this bitter medicine of truth is good for the healing and spiritual maturing of our character. As painful as it must have been to do to, Joseph revealed to his brothers the sin they committed in selling him into slavery. Yet, regardless of all that they had put him through and the years of hardship they had brought upon him, he still loved them enough to speak the truth and save their families. He understood that this was God’s ultimate plan for him and his family. We need more Josephs in our lives. We need to be Joseph in the lives of others. It is the only way to be accountable to and for each other as we walk together in God’s truth and love. We are each other’s keepers.

Bobby Varghese was born in Kerala, India, raised in New York, and feels Florida is too hot. He and his wife have called Bay Life Church home since 2001. They have two really great teenagers and would appreciate your prayers (because they’re teenagers).