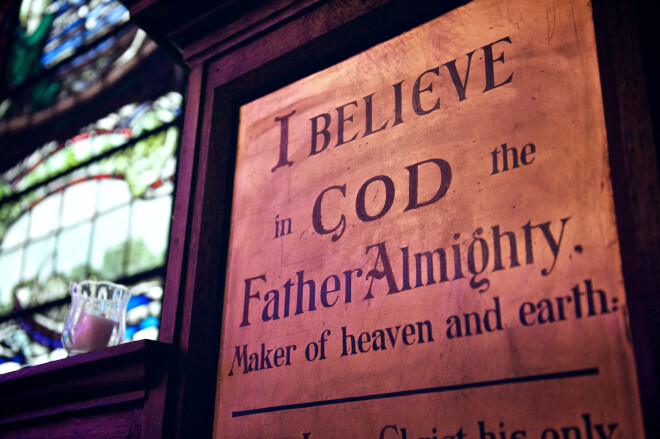 “No creed but the Bible, no creed but Christ.” Both phrases are slogans that you’ll find on church signs and behind pulpits. The sentiment driving each of these statements are noble, and yet they are naive at best. If we were to press a bit further, it would become apparent that most of us have particular beliefs about what the Bible teaches and who Jesus is. Many of us would not say, “you can believe whatever you want about what the bible’s message, as long as you are wholeheartedly committed.” Or, “Believe what you may about who Jesus is, so long as you are fully convinced.”

Mormons, Muslims, and Buddhists can all say they believe in Jesus, and yet we believe very different things about who He is and what He accomplished; those beliefs are profoundly and irreconcilably different. The Christian life is not an interpretive free for all; there are boundaries, and once these are crossed we are no longer operating within the stream of Christianity. That's is why the Church found it so helpful, throughout her history, to summarize in short statements what the Bible teaches about who Jesus is and why He entered into history. These ideas were codified in the early statements of Christian belief, some of which can be found in the New Testament itself (Acts 15:23-29, 1 Timothy 3:16).

Outside of the New Testament, perhaps the earliest and most complete creedal statement would be the Apostles Creed. It outlines, in a basic way, what Christians believe about who God is and what He’s done in Christ. There’s some indication that it started as a series of questions asked during a new believer's baptism. Only after the participant had answered, “Yes” to each of the 12 lines were they submerged. It’s this creed that we’ll be spending the next 12 weeks or so studying in our life groups.

This might feel a little bit counter-intuitive for those of us who grew up with evangelical backgrounds; aren’t the creeds just for people who accept tradition over what the Bible teaches? It's a good question, but it isn’t how the early church viewed the creeds. They labored and debated endlessly to make sure that creedal statements accurately reflected everything that the Bible said. So it’s important for us to recognize that the Apostles' Creed has authority, not just because it’s ancient, (although it is) but because it is an accurate summary of what the Bible teaches. Christians throughout the ages and from all branches of the church have recognized that this short statement accurately summarizes some of the most foundational teachings of the Bible.

Just because something is older doesn’t necessarily make it better or worthwhile…heresy after all, is as old as the New Testament, and we’re not clamoring to study heretical teachers. But there is something significant to the fact that the Apostles Creed is ancient, and reminds us that our faith is also ancient. The great temptation for those of us living in the modern world is what C.S Lewis called "chronological snobbery." We cut ourselves off from the wisdom of the past, thinking that we know better now. For Christians, this will not do. We are not the first generation to believe the Gospel, we’re not the first generation to follow Jesus, and we are certainly not the first generation to receive the Holy Spirit. As the West becomes increasingly hostile to Christianity, the way forward will likely be backward. Our task is to listen first to the Scriptures and then to the voices of those who have come before. We desperately need to hear from our ancient brothers and sisters who walked in the light of the Gospel in cultures far more hostile than our own. There is comfort in knowing we are not the first. We are indwelt with the same Spirit who led the Apostles, strengthened Ignatius in the lion's den, guided the early church in composing the Creed, laid hold of Augustine under the pear tree, illuminated the mind of Aquinas, and drew Luther to behold the Scriptures afresh. He has been faithful to guide the Church thus far, and He can be trusted to guide us safely to our home country no matter how dark the hour. So, this summer we're studying the Apostles Creed; a rich, ancient, and Biblical confession which has been shared by the global Church throughout the ages.

Posted by Travis Lowe
May 9, 2017
in College and Career

The Holy and The Common: An Interview With Jenica Crotts About Faith and Art

Because we believe that art has value in the life of the church, the College + Career ministry works with artists from a variety of mediums to illuminate the biblical themes of our teaching series. Jenica Crotts produced a series of digital collages to illustrate the themes of sin, judgment, and redemption which ran throughout our recent Lent series. She was kind enough to talk with us about her work, and the importance of the arts among the people of God.

Can you explain a bit of your background; how you became interested in art, and the work you do through, "The Holy and The Common"?

I became more interested in art during my education at a liberal arts college. I had always enjoyed my middle school and high school art classes but decided to take some art courses to both fulfill some of those liberal arts requirements and to take a break from my other studies. I especially loved my printmaking course and was intrigued by how to make the flat images more dynamic. I explored digital collage work after college and after learning a few basic Photoshop skills. I invested more time in my college work while working as a teacher. Again, art was an escape from my other stresses, but it also brought a sense of fulfillment.

Why do you think that the church ought to place a value on art? What would you say to someone who struggles to understand its place in the life of the church?

All of creation is God’s handiwork and we, being made in the imago dei, can reflect the Creator with our creations. Both the act of creating and the act of reflecting on the beautiful are worshipful acts acknowledging God as Creator and ourselves as His creatures. Art is also another avenue through which to communicate God’s truth.

Can you explain a some of the symbolism you’ve used in the pieces you produced for Lent?

The Ash Wednesday piece is a bit darker than the rest since Ash Wednesday reminds us of our sin and our finitude. So, for the Ash Wednesday piece, I included a cloud of ashes and a snake as a reminder of sin and the need to repent. The palm branches on the right point to Palm Sunday and Easter and the triumph of Christ’s death and resurrection. The central figure once again plays with sin. The more solemn eyes on the face of a child represent the perversion that sin brings and how we are blinded by our sin. 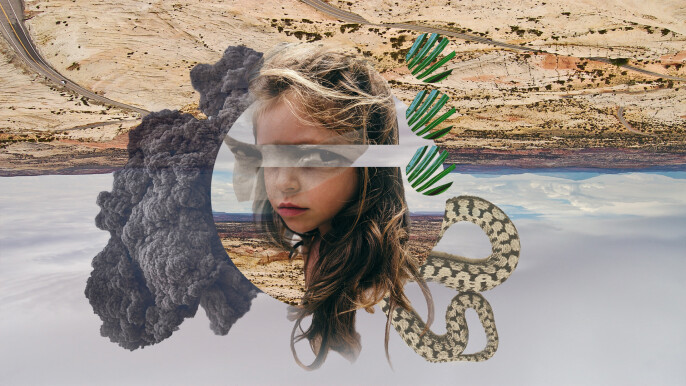 I tried to make the Lent piece is a little more hopeful. Again, you have the reminder of death and sin with the skull, but the hands and bird above are reaching up from the barrenness of the desert. While the hands aren’t in a praying posture, I was hoping they would communicate supplication. The central stones/mountain point to the barrenness Christ faced in the desert and function as a symbol of him overcoming the devil’s temptation to turn the stones to bread. I’ve also included motifs of water and waves to represent baptism and reconciliation found in Christ. 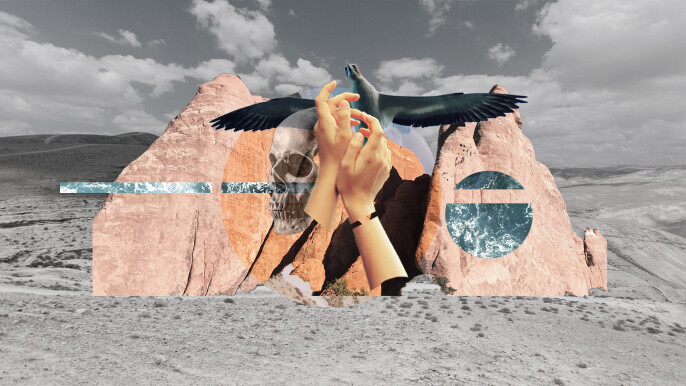 The final piece combines the motifs from the previous pieces (reaching/praying hands, water, palm branches, ashes/smoke) as well as the wing of a swan, representing purity/reconciliation found in Christ. 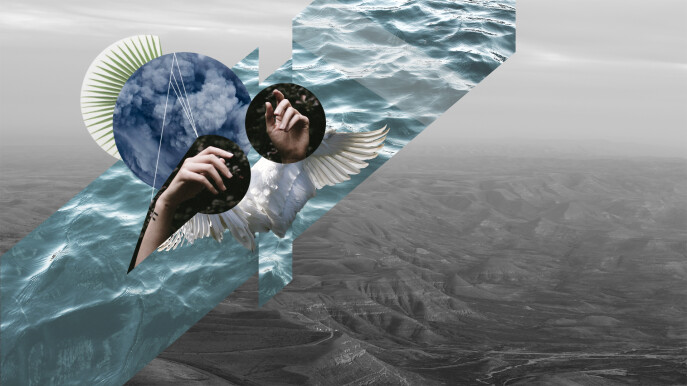 As you've mentioned, the imagery of some of these is certainly dark. Why do you think that it’s important that art produced by Christians does not shy away from darker themes?

Thanks so much for taking the time to talk with us about this, where can people find you if they’re interested in exploring more of your work?

Right now I am taking a break from collaging as I transition to a new city, but hopefully, soon my etsy shop theholyandthecommon will be back up and running!